With the advent of the digital, or information, age back in the 1950’s, artists immediately began to grasp the technology of the time and utilize it in the practice, and elevation, of their disciplines, pushing the boundaries of both their own creativity and the definition of art itself.

From television and the personal computer, to photo manipulation software and the internet itself, artists seized these new mediums and began to challenge the traditional notions of art. This eagerness to expand the realm of art to include new and exciting technologies evolved the nature of art and changed the way we thought of artistry and artists.

While digital art in itself is not a distinct style or school of thought, it none the less has had, and continues to have, a profound effect on the art world. As time goes on and technology continues to advance, artists from around the world and across different disciplines are keeping art alive in the constantly-evolving digital landscape, cementing digital art not just as a separate movement in and of itself, but as an evolution of traditional art itself.

Not even 20 years after the first commercial computer was released, a collective of computer engineers and artists formed the tech-art group EAT, or Experiments in Art and Technology, in 1967. Headed by engineers Waldhauer and Klüver, along with graphic artist Rauschenberg and experimental artist Robert Whitman, EAT was founded to propagate the merger of art and the brave new world of computers.

EAT gave birth to various performances and installations that incorporated the latest computing and electronic systems with wireless sound, circuitry, video projection, and other forms of broadcasting art into the world.

Because the technology used in these early installations used relatively primitive technology, it’s hard to classify them as “digital art”. However, the EAT pieces are considered by many to be the forerunners of an art style that sought to embrace and enjoy technological wonder rather than rejecting it as traditional art has done.

The EAT performances showed the general public that art, artists, and technology can go hand in hand, and gave rise to the seminal works in conceptual and performance art, including experimental noise music. Meanwhile, pieces from Fluxus, the “happenings” of the 60’s, and even Dada, were updated and brought into the digital age.

But perhaps the first ever piece of art considered to be fully digital was the piece Young Nude (1966). This simple photograph of a nude woman was turned into an image comprised of multiple pixels. The artist, Kenneth Knowlton, was working as a computer graphics specialist at Bell Labs. Although simple, Young Nude represents the first step towards realizing a fully digital artistic work, paving the way for future computer artistry.

As EAT grew in influence, other artists began to see the potential artistic value of technology, bringing to life conceptual pieces for public consumption. One prominent example of this is Hello, a 1969 “happening” by artist Allan Kaprow, wherein a group of people interacted with one another via a system of television monitors. By the early 70’s, artists from various disciplines began to experiment with the connectivity of mass media broadcast technology, such as television and recording equipment. In the same decade, artists also began to use computers in their art, utilizing the budding advance of computer technology.

In a 1974 book entitled “Media Planning for the Postindustrial Society: The 21st Century is now only 26 years away”, Nam June Paik, a video artist pioneer, predicted how technological advancements such as television are able to bring people from a wide array of social backgrounds and geographic distance via a shared experience with broadcast materials. 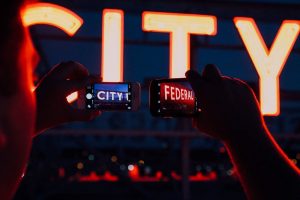 With the advent of mobile phones and the birth of the internet, this idea of communicating the subjective human experience to a wider audience began to inform artistic pieces of that time. Computer technology helped this evolution along, with the introduction of the Apple II computer, a then-revolutionary piece of technology that enabled users to see color graphics on a personal computer for the very first time. By 1979, modems were sending digital signals across telephone lines, the first steps of the infant internet.

By the 1980’s, artists began to use computer animation, bringing to life a new industry that grew at an exponential rate. The bright colors and square pixels significantly impacted the aesthetic form of that decade and helped artists develop a distinctive style that was truly “digital” using mass-produced software. Over time, companies like Adobe helped evolve computer graphics, designing various graphics software like Illustrator and Photoshop. Their decision to market these products to a wide audience gave the common man the ability to create art on their own, and artists jumped at the opportunity to further push the boundaries of artistic expression.

The Age of the Internet

By the mid 90’s, the internet had grown from a technological oddity into a widespread phenomenon that dominated nearly all aspects of society, from commerce and politics to art and media. Around the world, artists began utilizing the internet to expand their creative outputs, marrying the concept of an interconnected network of information with their own artistic styles. 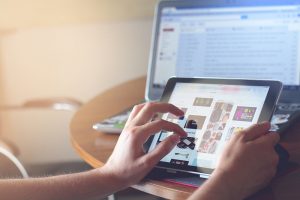 By the early to mid-2000’s, the internet had become an integral part of society, with a new generation of people being born into a computer-integrated world. Whereas before, the internet was a place people uploaded their work of art, the late 2000’s saw artists using the internet itself as an artistic medium. At this point, critics began to analyze the effects of the internet, noting the significant detachment from reality that many people and artists feel with the internet. Some people, on the other hand, fully embraced the disconnect, creating online personas that were part-performance, part-biographical representations of people.

The latter phenomenon was aided by the advent of social media and of video streaming services like YouTube. As more and more people gain access to the tools of digital art, digital artists began trying to find ways to navigate this new landscape. With the art world now fully embracing digital art, collaborations between different artists from different parts of the world using very different styles of art began to proliferate, and the delineation between artist-producer-audience began to blur, much to the chagrin of some, but to the celebration of others.

Today, there is a very fine line between “traditional” and “digital” art, and it is a line that grows finer by the day. With every introduction of a new piece of technology, artists are even quicker now to jump at the opportunity of using it for their artistic aims. The advancement of technology is exponential; development times between new technologies grows shorter every year, and we will no doubt see a new form of art over the next decades.