With the upcoming Olympics, many people are asking about the fate of esports. While some people don’t even consider the two being in the same league, the question remains: should esports be part of the Olympics?

Critics of esports say that the videogame industry has no place in the Olympics, as the latter is a place of pure physical sports. However, with the advancement of technology, and indeed the advancement of society itself, many people are now questioning whether or not this is a good enough reason to bar one of the most popular activities around the world today from the Olympic games.

Here are some reasons why we think it’s a great idea to include esports in the Olympics.

Esports is a $1 BILLION Industry

The IOC makes 90% of its revenue on broadcast rights and sponsorship. If that’s the case, then including esports into the Olympic roster also has a practical aspect. 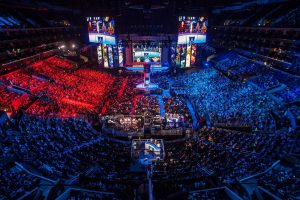 Consider that the global esports industry just hit $1 Billion in 2018, with most of that money coming from major tech sponsors. But it doesn’t stop there: as more people get access to pro-performance-grade computers, faster internet, and more video games,analysts are predicting a 48% year-by-year increase in esports revenue, that’s almost $700 million dollars of income every year.

But it’s not just the money: in 2018, an estimated 165 million esports enthusiasts participated in world wide leagues and local events, while another 200 million watched the events. And analysts predict that even MORE people will be hooked on the esports phenomenon as time goes on.

With a wavering fan base and dried-up coffers, the IOC desperately needs to inject both fans and money into the Olympics in order to keep it alive, and esports is the natural and most logical choice to do so.

A lot of people give esports grief for not being physical, and indeed, the stereotype of the “fat, lazy gamer who lives in his mom’s basement” still persists, despite the billion-dollar industry they’re part of.

But what many people fail to realize is that esports require the same amount of psychological, emotional, mental, and yes even physical, stamina required in other sports. Gamers can spend years training in a particular game, adapting as needed when a new patch is unveiled, or even picking up a new game should the need also arise. 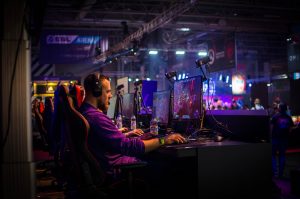 Prior to an event, professional gamers will spend months training, just like other athletes. They’ll study the mechanics of a particular game, from how characters interact with the game environment and even studying how every pixel will affect their gameplay. It might take just a matter of hours, minutes even, to learn how to play a videogame, but it can take YEARS to master just one. Professional gamers, however, are required to master more than one videogame at a time, just so they can compete in multiple events.

Much like Chess, the discipline required studying esports is just as rigorous and requires the same amount of discipline. Video games are proven to increase a person’s dexterity, reaction times, mental problem solving, and other intellectual aspects.

It’s A Step Towards the Future

The modern Olympics was founded in 1894 by a French nobleman, Pierre de Coubertin, in order to strengthen “moral and social strength”, which he believed can be done via sports.

Yes, the original idea of the Olympics was pushing the physical boundaries of the human body, creating appreciation of different cultures via an international meeting of athletes, and forwarding the best of humanity by empowering noble attributes like honor, ambition, persistence, and the will to win.

Pierre de Coubertin could not have imagined the kind of world we live in now, where those same values can live on in a digital landscape. While physical sports will always endure as the physical embodiment of such values, it’s high time that we included the digital embodiment as well, if only to represent Man’s constant effort to elevate itself.

Esports represent the future, a future where Man can push the mental boundaries of the human mind, creating an intellectual society that is holistically developed, and forwarding a culture that embodies the original attributes of the first Olympic games.

As of now, the IOC included esports in the 2016 Olympic games as an “exhibition sport”, putting it in the same league as Chess and Bowling. While esports enthusiasts would like to see an official inclusion as an Olympic game, many hurdles are still to be faced.

First: the Olympics bars events that are aggressive or violent, as this runs counter to their founding values. Unfortunately, some of the most popular esports titles, such as Counter-Strike or Overwatch, would most likely be cut due to their depiction of violence.

MOBA’s such as League of Legends and DotA might also fall short of the Olympic values. The exclusion of these titles might inhibit a majority of esports fans from watching the Olympics, which would be a shame, considering that one of the biggest draws of esports is its unparalleled fanbase.

Secondly: what videogame titles will be part of the Olympics? Certainly, fans of different franchises will rally for their favorite game to be included, but if the most popular titles don’t make the cut, what will be the replacement? While it would be a great feeling for fans of smaller games like Rocket League or FIFA to be included in the Olympics, do they have a large enough fanbase to justify inclusion?

However, all is not lost: in the 2018 Winter Olympics, popular RPG StarCraft II was included as an official event, despite its war strategy theme. Some analysts believe that this shows the IOC’s willingness to loosen their interpretation of values and shows their appreciation of the advancement of technology and their eagerness to include the youth sector even more.

For now, however, esports need to wait a bit more. There are major hurdles to overcome and negative stereotypes to break, but I believe that esports DOES have a place in the Olympics, if only because it teaches people the same values they can learn with physical sports: teamwork, the drive to win, and the will to survive.

What are your thoughts on this issue? Comment your ideas below!

Spread the love
Scroll to Top